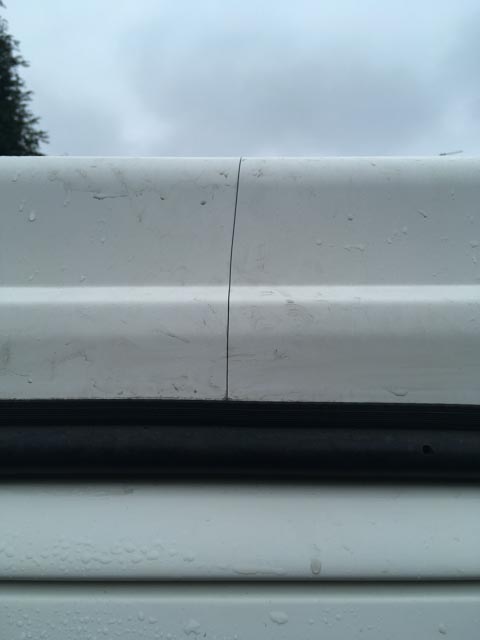 So when I got the van it had the dreaded roof crack on one side. As others have discovered and I repeat here, roof is an ASA plastic. My first attempt was to plastic weld the crack shut using some ASA plastic rods and a soldering iron.

I have experience doing plastic welding on motorcycles and the issue that I have found (with my technique at least) is that I can make a bond by welding from one side and can sometimes get a decent weld but for a structural bond, you need to weld from both sides. On the van there is no access to the inside of the ASA shell. . . .

My first weld actually held up for a decent amount of time, 6 months- year.

When it opened up, it did so at an awkward time, I did a rush re-weld that didn’t stick. After this I started considering adding reinforcement material to it. I had seen people drill holes and bolt metal supports in. I decided that bonding carbon fibre sheet to it would give me similar results with no penetrations.

First attempt produced some freaky results. I used non-structural thickness of CF but as I was sticking it on when the roof crack was shut it would be in tension and strong enough in this manner. Unortunatly, that wasn’t how it played out. I didn’t strap the roof crack shut, used a 48hr cure adhesive and the roof opened up over night and it cured in an open state. The sheet ended up bent in a way I wouldn’t have though possible!

After this, I added a second piece but used a structural thickness and researched for better structural adhesives. The advise I got was Plexus MA310 which is quick setting and advised for difficult to bond plastic surfaces. The second time I also held the roof crack closed with a ratchet strap!

Not had any movement since adding the last reinforcement. I believe mine was cracked as the previous owners were closing the top on the roof bedding and it wasn’t closing at the back adding extra strain.